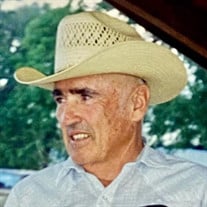 Donald Keith “Jack” Beavers of Laramie, WY died on Sunday, November 14th at the Medical Center of the Rockies in Loveland, CO. He was born on August 1st, 1932 in Midwest, WY to Buck and Edna Beavers. Jack was a true cowboy. He was raised on the family property in Dayton, Wyoming, choosing to stay behind when the rest of the family moved to Powell. He graduated top of his class from Dayton High School in 1950 and worked as a Cow Puncher until entering the Army and serving in the Korean War. On May 28, 1958, he married Geraldine Suttle in Sheridan and had their first daughter, Jacquelin in 1959. Their second daughter, Becky came in 1964, and son, Clint in 1966. After graduating with a degree in Civil Engineering from the University of Wyoming in 1962, Jack worked as an Engineer for the Forest Service for 25 years, enjoying a long retirement. Jack enjoyed hunting, spending time outdoors and being out at the barn. However, his true love was everything Old Western. He collected western memorabilia, went to museums, auctions, rodeos and mastered the art of the yard sale. He was a proud supporter of Wyoming Athletics, Cowboy Joe Club, and the Steer a Year program. He served on the University Animal Care Committee and drove the Stagecoach at the Wyoming Territorial Prison for many years. He could often be found drinking coffee with his buddies on a Tuesday morning. Jack is survived by his wife, Geraldine Beavers of Laramie; children, Becky Beavers of Cheyenne, WY and Clint Beavers of Laramie; sister, Jeanette West, from Dayton WY; grandchildren, Cody St.Clair (Cyndi) and Cammi Capps (Chris); great grandchildren, Ayala and Anthony St. Clair and Colter Capps; and nieces and nephews. He is preceded in death by his parents, Buck and Edna Beavers; brothers, Carl and James Beavers; and his daughter, Jacquelin St. Clair. Services will be held at 10:00am on Tuesday, November 23rd at Wiederspahn- Radomsky Chapel of the Chimes in Cheyenne, followed by burial at the Cheyenne National Cemetery. A reception will follow at 12:00pm at the Governor’s Residence in Cheyenne.

Donald Keith &#8220;Jack&#8221; Beavers of Laramie, WY died on Sunday, November 14th at the Medical Center of the Rockies in Loveland, CO. He was born on August 1st, 1932 in Midwest, WY to Buck and Edna Beavers. Jack was a true cowboy. He was... View Obituary & Service Information

The family of Donald "Jack" Beavers created this Life Tributes page to make it easy to share your memories.

Send flowers to the Beavers family.