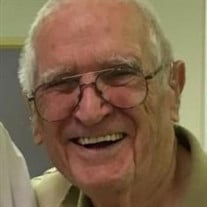 Donald L. Edgar, 94, passed away June 15, 2022 at Davis Hospice Center after a brief illness. Don was born at home in Cheyenne on December 16, 1927 to Ernest and Merle (Hammans) Edgar. He attended Cheyenne High School prior to joining the U.S. Navy during his senior year in 1945. He met his beloved Virginia (Schmid) while square dancing. They were engaged one month later and married in December 1959. Don retired from the General Services Administration in 1982 and promptly started his own fix-it business. Colorado (later Cheyenne) Aerotech decided it would be cheaper to hire him rather than keep contracting with him and he became their maintenance supervisor. A serious injury forced his permanent retirement in 1992. Don and Virginia retired to Battlement Mesa, Colorado, returning to Cheyenne in 2009. Don was a walking, talking history of Cheyenne. Born just prior to the depression, he spent his teen years working at him mom’s diner, as a “pick-pocket’ at White House Cleaners, concessions at the local movie theater, skate assistant at the roller rink, a paperboy, and a call boy for UPRR. After discharging from the Navy, he helped at his Dad’s gas station and worked as a civilian electrician on FEWAFB before transferring to GSA. Don was a proud Navy Vet, serving two tours. His first tour was spent primarily in the deserts of Arizona and California; the second tour was aboard the USS DesMoines, serving as part of the US post WWII peacekeeping mission in the Mediterranean and Atlantic Oceans. During this tour, Don had the honor of meeting and showing a movie to then Princess Elizabeth and Prince Philip, who toured the ship during their honeymoon. Don was a jack-of-all-trades who frequently helped others with remodeling and repair projects on their homes. When his children were young he helped with Little League and the Boy Scouts and assisted with several PTA projects at Bain Elementary. He served as treasurer, Commander, and Past-Commander for three different VFW chapters and was active with the American Legion, Battlement Senior Citizens, his churches in Cheyenne and Battlement, and the Knights of Columbus. He was recognized as a nominee for Colorado Volunteer of the Year. Don is survived by his children, Diane Edgar, Marie (Brad) Miskimins, Daniel (Jeanne) Edgar, Julie (George) Gliem and Cynthia (James) Hayden, all of Cheyenne, and Phillip (Karrina) Edgar of Peoria, Arizona; grandchildren, Cody (Xanthe) Edgar of Houston, Texas; Troy (Carrie) Miskimins of Washington D.C.; Joshua (Synthia) Edgar of Colorado Springs, Colorado; Jericha (Trent) Werner of Pine Bluffs, Wyoming; Jeremiah (Jasmine) and Jordan Edgar, Tiffany and Michala Gliem, Courtney and Zane Hayden, all of Cheyenne; and great-grandchildren, Joshua, Joslynn, Paisley, Karsyn and Ella. He was preceded in death by his wife, Virginia; his parents; daughter, Karon; brothers, James (Jack), Ernest (Gale), and Richard (Wayne); sister, Doris Rader Reynolds, and daughter-in-law, Leandra Edgar. Funeral Liturgy will be Thursday, 10:00 a.m., at Holy Trinity Catholic Church with a reception to follow. Burial and military honors will be Thursday, 1:30 p.m., at Beth El Cemetery.

Donald L. Edgar, 94, passed away June 15, 2022 at Davis Hospice Center after a brief illness. Don was born at home in Cheyenne on December 16, 1927 to Ernest and Merle (Hammans) Edgar. He attended Cheyenne High School prior to joining the U.S.... View Obituary & Service Information

The family of Donald L. Edgar created this Life Tributes page to make it easy to share your memories.

Send flowers to the Edgar family.