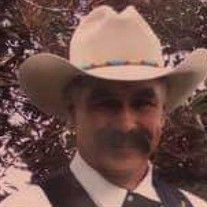 On Friday January 8, 2021 Don Buckles loving husband, father, and brother passed away at the age of 75. Donald Jordan Buckles was born on January 22, 1945 in Poplar, Montana to Mary Ellen “Buckles” Etzel and William David Falcon. He attended school in Poplar, MT and graduated from Stephan, South Dakota. He was married two previous times and had four children. His first marriage was to Vernita “Perry” Buckles, from this marriage he had three children, Allen Buckles, Michelle Buckles, and Donelle Buckles. His second marriage was to Nadine “Flynn” Buckles, from this marriage he had a daughter, Lani Buckles. His third and final wife is Carol “Hayes” Buckles and to this union he gained four stepchildren, Michele, Daniel, Dakota, and Sandra. He served in the army in 1967 and was honorably discharged in 1968. He started working in the oil fields at the young age of 16 and continued working for many years. He retired briefly and returned back to the job, he loved working his way up as a petroleum engineer. He loved hunting, ATV trail riding, and camping. His hobbies were leatherwork, reading and watching old western movies. His favorite thing to do was spending time with his family. He was well known for his kind and compassionate spirit. He was always willing to help anyone that was in need of help. He loved to visit everyone and anyone, he always had a good story to tell. He was proud to be a great grandfather to 12 great grandchildren. He is preceded in death by his father David William Falcon and his mother Mary Ellen Etzel. His brothers Eugene, Lewis, Dorrance, and Alvin. His maternal grandparents Hazel and David Buckles. He is survived by his loving wife Carol and her four children Michelle and Mark Subotnick and their two children Devon and Jackson, Daniel, Dakota, and Sandra. His son Allen Buckles and his six children, Nick (Patricia) Bighorn and their two children Noah and Harlow. Seth Shields, Alex and Erin Buckles, Payton and Brayden Dupree. His daughter Michelle Buckles and her four children. Lana (Bryan) RedDog and their twin daughters, Peyton and Paige. Joseph Buckles and his two daughters, Chassidy Eagleman and Zayliana Buckles. Casey Ferguson and Miles Buckles. His daughter Donelle Buckles (Darryl Joe Sr.) and their four children. Miranda (Owen) Gramling, and their three children, Jaizon, Mila, and Mesa. Frank and Darryl Joe Jr. Taylor Buckles and his daughter Lillian Frederick. His daughter Lani Buckles and her two children. Joshua Buckles and his two children, Tyler and Samantha. Tanner Buckles. His sisters Kandice (Johnny) Lucero, Laverne (Sam) Bankston, Suz’Ette Doyle. Brothers Marvin “Muff” (Eva) Magnan and Robert “Robbie” Magnan. His stepfather Robert “Bob” Etzel and several close family members to numerous to mention. If we forgot anyone we apologize. Not a day will go by that we will not think of you. You will forever be in our hearts.

On Friday January 8, 2021 Don Buckles loving husband, father, and brother passed away at the age of 75. Donald Jordan Buckles was born on January 22, 1945 in Poplar, Montana to Mary Ellen &#8220;Buckles&#8221; Etzel and William David Falcon. He... View Obituary & Service Information

The family of Donald J. Buckles created this Life Tributes page to make it easy to share your memories.

Send flowers to the Buckles family.