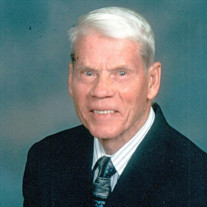 Donald Eugene Barker, 93, of Cheyenne Wyoming passed away on February 8, 2021 while a resident at Spring Creek Inn in Bozeman, MT. Don was born on August 22, 1927 in Glaymorgan, Wise County, Virginia. He was the 2nd of nine children born to William Wade and Lilly Collins Barker. He is survived by brothers Jack, Jim, and Dallas Barker. Don dropped out of high school to join the U.S. Navy and served on a troop ship in the Philippines (1945) and the USS Hydes (1946). After his discharge from the Navy he returned to Virginia and received his high school diploma. He met and married Maudie Alene Johnson in Wise, Virginia, in 1948 and went to work at the local telephone company. In 1951 He Joined the U.S. Air Force and was assigned to the advanced detachment providing communications for the new base and landing strips in Korea. During his Air Force assignments in the advanced communications division, Don and his family lived in Georgia, Omaha, Spain, and Newfoundland before he was assigned to Warren Air Force Base in Cheyenne. In 1968 Don was assigned to the Air Force Advisory Group Viet Nam where he was awarded the Bronze Star and served until assigned to Biloxi, Mississippi. After retirement from United States Air Force on January 31, 1970, Don returned to his family in Cheyenne and went to work for Wycomco and then the State of Wyoming State Radio Shop. He retired in 1990 and became a Major in the Wyoming Wing of the Civil Air Patrol. Don was preceded in death by Maudie, and in his golden years met and married Marion Theibault of Toms River, New Jersey. Marion overcame her fear of the Wild West, its open spaces, and wild animals, and moved with Don to Cheyenne where they spent many years enjoying each other’s company. Don was an avid outdoorsman who enjoyed collecting rocks of all kinds. It has been said that there isn’t a rock in Wyoming that hasn’t been picked up, turned over, and scrutinized by Don. For many years he was honored as dedicated Scout Master of Francis E. Warren Boy Scout Troops. With his family, he enjoyed the forest cabin he built and spent many wonderful weekends exploring the mountains around Keystone, Wyoming. Don is survived by his son Donald Lee Barker (Lynn), Arlington, WA, daughter Eugenia Alene Tiemann, Bozeman, MT (Jim, deceased), son Douglas Karl Barker, West Des Moines, IA, grandsons Anthony Donald Bontadelli (Becca) and Canaan Richard Bontadelli (Kristen), and awesome greatgrandchildren Maiah, Jackson, Riley, Hadley, Colter, and Elliott Bontadelli all of whom he dearly loved and who loved him in return. A private family service will be held at Cheyenne Memorial Gardens. A celebration of Don’s remarkable life will be held at a later date.

Donald Eugene Barker, 93, of Cheyenne Wyoming passed away on February 8, 2021 while a resident at Spring Creek Inn in Bozeman, MT. Don was born on August 22, 1927 in Glaymorgan, Wise County, Virginia. He was the 2nd of nine children born to... View Obituary & Service Information

The family of Donald Eugene Barker created this Life Tributes page to make it easy to share your memories.

Donald Eugene Barker, 93, of Cheyenne Wyoming passed away on...

Send flowers to the Barker family.