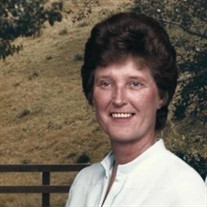 Dessie “Fern” Ley 83 peacefully passed away on February 5th, 2020 at Davis Hospice in Cheyenne, WY, after a long battle with Alzheimer’s Dementia. Fern was born on September 4, 1937 in Kaycee, Wyoming, to Blanche Marie and Wesley Stanley. Her parents were sheepherders in the Kaycee area. She met the love of her life James E. Ley and they were married on July 14th, 1956 in Greeley, WY. Jim and Fern were the proud parents of three daughters Brenda, Janice and Connie and lived in Cheyenne. Fern was a school bus driver for Laramie County School District #1 until her retirement. She drove bus # 67 for many years in the Cheyenne area until she took a rural route, which she enjoyed very much. After her retirement, Jim and Fern did a lot of camping and traveling. She enjoyed gardening, being in the outdoors and cooking/baking. She loved to make her famous sticky buns/cinnamon rolls and share them with friends and family. You could taste the love in every bite! After the death of Jim in 2002, Fern and a former co-worker, John Estabrook, became a couple. John was the second love of her life and a devoted companion until her death. John and Fern spent the winter months in Arizona. She enjoyed going on long rides in the dessert and most of all spending time with John. The other love of her life was Levi, a toy poodle, who was adopted from the Animal Shelter shortly after Fern was diagnosed with Alzheimer’s Dementia, they needed each other and bonded immediately…true unconditional love! Fern is survived by her loyal and faithful daughters, Janice (Tom) Rath of Cheyenne, WY and Connie (Tom) Weinrich of Sedalia, CO. She was the proud Grandmother of James Douglas, Jacob Douglas, Jay Scott Douglas of Texas, Kyli Rath of Cheyenne, Lauren Scholz of Colorado Springs, CO, and Hannah Scholz of Highlands Ranch, CO. Fern is preceded in death by her husband James E. Ley, her daughter Brenda Douglas of Elkhart, TX; her parents Blanch and Wesley Stanley; her siblings, Kate Baker, Mary Bates, Flora Mae Schotz, Donald English, and Bob Stanley. Pallbearers are James Douglas, Jay Scott Douglas, David Estabrook, Johnny Crock, Jr., Tom Weinrich and Tom Rath. Services will be held at Wiederspahn-Radomsky Chapel on Thursday, February 11th, 2021 at 2:00pm. Public visitation will be held on Wednesday, February 10th from 9:00am – 5:00pm. Interment will be held at Cheyenne Memorial Garden after the ceremony. In lieu of flowers, please make gifts to Davis Hospice, 6800 Sycamore Road, Cheyenne, WY 82009, in Fern’s Memory.

The family of Dessie Fern Ley created this Life Tributes page to make it easy to share your memories.

Send flowers to the Ley family.