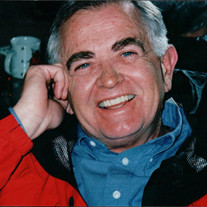 Dennis Michael Grant, 79, of Cheyenne, died on November 29, 2021 in Cheyenne. He was born on May 26, 1942 in Cheyenne. Dennis graduated from St. Mary’s High School in 1960, received his bachelor’s degree from the University of Wyoming, and his JD from the University of Wyoming College of Law in 1974. He served in the United States Army from 1967 to 1970. Dennis was a lawyer in private practice from 1974 to 2020, and served as Laramie county Assistant District Attorney from 1983 to 2013. He was a member of the Wyoming State and Laramie County Bar Associations, belonged to the Knights of Columbus, and volunteered for Habitat for Humanity. He was particularly proud of his "Fifteen Gallon Award" for blood donation from United Blood Services, which he received in 2002. He is survived by his wife, Kathi, his three children, Dennis Michael Jr., Jason, and Kathleen, his daughter-in-law, Nikki, his grandchildren Makenna, Christopher, Mikaela, and Dennis Michael III, his great-grandson, Braxton Michael, his step-daughter and son, Staci and Kevin, his brothers, Rocky and Lanny, his sisters-in-law Peggy and Linda, and nieces and nephews, Kevin, Brenda, Janelle, Amy, Erin, Molly, Adam, Derek, and Jade. Dennis was preceded in death by his father, Jack, his mother, Jessie, his sister, Sharon, his brother, Bennett, and his nephew, Kenny. Vigil for the Deceased will be Thursday, 6:00 p.m., at Wiederspahn-Radomsky Chapel. Funeral Liturgy will be Friday, 2:30 p.m., at St. Mary’s Cathedral.

The family of Dennis Michael Grant created this Life Tributes page to make it easy to share your memories.

Send flowers to the Grant family.