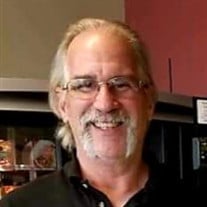 Clifford (Cliff) Duane Abraham of Cheyenne, WY, was called home to be with the Lord on October 9, 2021. He passed away peacefully at the Cheyenne VAMC, surrounded by his family. He was born at Vandenberg AFB in California on April 15, 1963 to Robert and Freda Abraham and named after his maternal grandfather. When Cliff was 7, his father was stationed at F.E. Warren AFB and the family moved to Cheyenne, WY. He attended Cheyenne schools, acquiring many friends and fond memories, and graduated from Central High School in 1981. Cliff joined the U.S. Navy on September 1, 1983 at NATTC San Diego, CA. His duty stations included the following: USS Ranger (CV-61); NATTC Millington, TN - Aviation Ordinanceman (AO) A School; VA-165 Boomers; NATTC Lakehurst, NJ - Aircrew Survival Equipmentman (PR) A School; HC-1 Fleet Angels; NASWI AIMD – SEAOPDET and Shore Duty; VAQ-135 Black Ravens, and VAQ-129 Vikings. Cliff’s Navy career spanned 20 years and included 9 major deployments (lasting 6 months or more) and numerous shorter deployments overseas. He retired from distinguished service as a PR1 (AW) on September 30, 2003 as NAS Whidbey Island, WA. Following his retirement from the military, Cliff and the family continued to reside in Oak Harbor, WA. He went on to a second career in transportation - driving buses for the school district, airport shuttle, and finally Island Transit. Cliff continued to work for Island Transit from 2005 – 2019, working as a dispatcher and finally the dispatch supervisor. In 2019, Cliff, Bonnie, and Rachael moved to Cheyenne, WY. He worked a few part time jobs until he got on full-time as a dispatcher for the Cheyenne Transit from early 2020 until his death. Cliff enjoyed working with the public and helping others. He loved having a personal relationship with the Lord and this showed in all he did. Cliff was an active participant in both the Church of the Nazarene and Church on the Rock in Oak Harbor, WA. After moving to Cheyenne, he attended and became a member of Meadowbrooke Church. He enjoyed hunting and was looking forward to deer and elk hunting this year. Cliff was an avid fisherman and absolutely enjoyed the annual fishing trip to Ilwaco, WA, with his close friends. He was well-loved and would do just about anything to help others if he could. Cliff was a loving and wonderful friend, husband, father, grandfather, brother, and cousin. He is survived by his wife of 24 years, Bonnie, and their children: Amanda Baker and her husband Jonathan and daughter Liyla of Wichita, KS; Kimber Abraham of Springfield, MO; Brandon Abraham of Oak Harbor, WA; and Rachael Abraham of Cheyenne, WY. He is also survived by his sister, Kimberly Mozley and her husband Wayne, and his step-mother, Mary Abraham, all of Cheyenne, WY. Also, surviving are two nephews: Ethan Mozley and his wife, Kylee, and son Oliver of Casper, WY, and Jacob Crum of Springfield, MO, as well as numerous cousins, friends, and other relatives. Cliff is preceded in death by his parents, Robert A. Abraham and Freda J. Harris, and his step-father, James A. Harris. A Celebration of Life will be held on Saturday, October 23, at 2:00 pm at Meadowbrooke Church in Cheyenne, WY. A second service will be held in Oak Harbor, WA, at the Church of the Nazarene – details to follow. Clifford will be interned at the Cheyenne National Cemetary on November 12, at 2:00 pm in a private ceremony. In lieu of flowers, the family requests that donations be made in his name to The Gary Sinise Foundation at https://www.garysinisefoundation.org/donate, or Davis Hospice Center in Cheyenne in honor of his mother, Freda.

Clifford (Cliff) Duane Abraham of Cheyenne, WY, was called home to be with the Lord on October 9, 2021. He passed away peacefully at the Cheyenne VAMC, surrounded by his family. He was born at Vandenberg AFB in California on April 15, 1963... View Obituary & Service Information

The family of Clifford Abraham created this Life Tributes page to make it easy to share your memories.

Send flowers to the Abraham family.