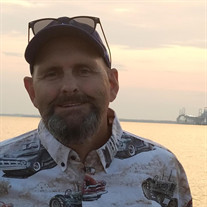 Christopher M. Stief, 53 of Cheyenne, Wyoming, passed peacefully at home with his loving family at his side on June 11, 2021. Chris was born May 13, 1968 in Cheyenne to Dick and Betty Stief. He is survived by his wife Patti, his three boys Adam (Alex), Zac (Riley), and Ryan (Makala Knox), his granddaughter Laney Ann, one sister Pat Hayter (Ken), one brother Michael (Susan), one niece Kendall Stief, two nephews and multiple great nieces and nephews. He was preceded in death by his father, Richard "Dick”, his Mother Betty and his sister Susan Laganiere. Patti called him “Babe/Baby”, the boys and Laney called him “Pops.” His friends knew him as “Beef.” The baseball and hockey kids knew him as coach Chris. He was a devoted husband, father, grandfather and friend and a man of “many hats” Chris's best times were spent with his boys in the shop. All three boys learned from their dad and now work in the trade industry, as reflection of the time they spent with him. For the last three summers Chris and Patti have spent a month on roads of America attending baseball games. Patti treasures the road trip memories to ball fields, the hot dogs and souvenir cups of soda he required at each. Patti will continue his bucket list of attending a baseball game in every MLB field in America. He made it to 15 of the 30 in body and will attend the other 15 in spirit with Patti. He loved camping and spending time outdoors. Fishing was a favorite! It was a fun time, as long as you did not out-fish him, on his boat! Then, his fish finder was junk or the simple announcement by someone, other than him, of “fish on”, would make him roll his eyes so hard that time was set back an hour. He loved to share his talents and passions of the arts. In recent years he shared his newfound passion for creating stained glass art not only with his own children but also with some of the art students at South High School. Last summer, he took time, during the summer road trip to teach an old family friend oil painting. His dry sense of humor kept his family on their toes. You could never tell if he was telling the truth or joking. He always had the ability to keep people laughing, sometimes to the point of milk coming out of their nose at the dinner table. One knew not to trust to leave their drink in his care even for a second, he always was adding something to them, his false teeth, mayonnaise or soy sauce, to name a few. His love a cars drew him into a community of Volkswagen and hot rod enthusiast. He spent much time talking about cars, going to car show, participating in clubs, and trading cars or car parts. It also gave his boys true meaning to the term “don’t tell mom” as they would do donuts in the pasture, in her car, burn outs in parking lots, in a friend’s car or topping out the speedometer down highway 85 in his Audi. January 31, 2020 he became a grandpa, that night he was so overcome with joy he sobbed. He was so proud to be a Pops and his love for Laney Ann grew by the day. It didn’t take long for Laney Ann to realize that the items on Pop’s table were sweets and he had no problem sharing them with her. They spent a lot of time together snacking on cookies, marshmallows, jelly beans and on occasion even cheerios. He will always be revered for the fight he put up to live. First his back in 2009, then the cancer diagnosis in 2016, in 2018 his hernia surgery, then 2021 he was diagnosed with malnutrition, that was his ultimate demise. His tired, worn-out body could no longer absorb the nutrients required to keep living. After a six week stay in the hospital, he just wanted to come home, to be with Patti and his kids. He was home for less than three days before he passed peacefully, with Patti holding his hands and all his kids at his side. He either liked you or he didn’t, to him everything was black and white, no gray. As his family, we are still trying to figure it out. Just kidding…. he loved us and we knew it. Services will be Friday, June 18th at 5 pm at Wiederspahn-Radomsky Chapel of the Chimes, a celebration of life will follow immediately at Patti and Chris’s home.

Christopher M. Stief, 53 of Cheyenne, Wyoming, passed peacefully at home with his loving family at his side on June 11, 2021. Chris was born May 13, 1968 in Cheyenne to Dick and Betty Stief. He is survived by his wife Patti, his three boys Adam... View Obituary & Service Information

The family of Christopher Mark Stief created this Life Tributes page to make it easy to share your memories.

Send flowers to the Stief family.