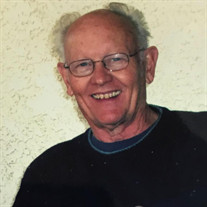 Charles Edwin Chapman, 88, was born February 19, 1932 in Caldwell Idaho to Charles Henry Chapman and Margaret Konrath Chapman Bauersachs. He married Bonnie Hollibaugh at St. John’s Catholic Church in Crawford, Nebraska on February 19, 1955, 65 years ago. To this union were born six children. He also has seven grandchildren and 3 great-grandchildren. He was a wonderful friend, brother and neighbor. Charles aka "Chuck" or "Chappie" as his wife Bonnie Called him, was an accomplished man. He graduated from Crawford High School in Crawford Nebraska in 1949, served four years in the US Navy, and then went to Regis College in Denver graduating in 1958. He received his CPA designation in Colorado. After receiving his CPA designation, he moved to Cheyenne, Wyoming and went to work for Raab, Roush & Gayman. Later he went to work at Blue Cross Blue Shield where he became the President. He received his master’s degree in business administration from University of Wyoming. Chuck served on the Cheyenne Frontier Days Committee, President of Kiwanis, served on the College Foundation and was an active member of Holy Trinity Catholic Parish, where he served in the Knights of Columbus for many years. He retired in 1998. After his retirement Chuck and his wife Bonnie shared many wonderful adventures in Arizona while wintering in Lake Havasu City, AZ. Chuck is preceded in death by his father; Charles Henry Chapman, his mother; Margaret Konrath Chapman Bauersachs, a stepfather; Frank Bauersachs, his eldest son; Charles Stephen Chapman, and his special grandmother; Gabby Konrath. Charles is survived by his wife of 65 years; Bonnie, sons; Cary Chapman (Jennifer), Chad Chapman (Phyllis), Daughters; Crystal Aschenbrenner, Carole Carlson, Carla Little (Patrick), grandchildren; Brandon Aschenbrenner (Molly), Cole Aschenbrenner, Ethan Carlson, Sydney Niss (Clayton), Calle Carlson, Eli Little, Sammy Little, and great-grandchildren; Savannah, Emerson, and Flint Aschenbrenner, his sister; Shirley Ward, and numerous nieces and nephews. Vigil for the deceased will be held at Holy Trinity on Monday, October 19th at 7pm. Funeral Liturgy will be Tuesday the 20th, Holy Trinity at 3pm. Interment will take place at Olivet Cemetery. In lieu of flowers, donations can be made to Alzheimer's Association, Holy Trinity, or to the American Heart Association. There will not be a reception after services. However, a Celebration of Life will be announced later. Expressions of care can be sent to www.wrcfuneral.com.

The family of Charles Edwin Chapman created this Life Tributes page to make it easy to share your memories.

Send flowers to the Chapman family.