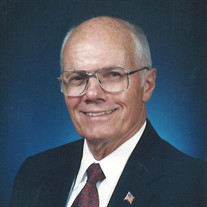 Bruce Miller, 87, of Cheyenne, passed away on January 11, 2021 at Cheyenne Regional Medical Center. Born May 16, 1933 in Worcester, MA to Ralph and Marjorie (Stockbridge) Miller, Bruce will be remembered as a dedicated and loving husband and father, and one who proudly served his country and community. Bruce married Barbara (Duenkel) Miller on May 29, 1960 in Roswell, NM. Joining the Massachusetts Army National Guard in 1951, Bruce continued his service in the US Air Force where he was stationed at bases across the US (including Roswell, NM; Grand Forks, ND; and Cheyenne, WY) as well as abroad (Guam and Johnston Island). Advancing to the rank of Chief Master Sergeant, Bruce was appointed the 90th Strategic Missile Wing’s Senior Enlisted Advisor in his final assignment at FE Warren AFB. He retired from active duty in 1979 after over 28 years of service. During and after his retirement, he was an active member of the First United Methodist Church in Cheyenne where he sang in the choir. He also participated in several Cheyenne Frontier Days, flipping pancakes at the Kiwanis breakfast and singing harmony on the Wyomingaires Barbershop Chorus parade float. After retirement, he earned a Bachelor of Arts degree from the University of Wyoming. Bruce and Barbara enjoyed spending time with their grandchildren and traveling the Nation in their motorhome. Bruce is survived by his three children, Kirk (Cheryl) Miller of Cheyenne, Keith (Dana Smith) Miller of Denver, and Jeanne (Mike) Ehlebracht of Casper; six grandchildren, Dustin Worthington, Cody Worthington, Elliott Miller, Claudia Miller, Noah Miller, and Katherine Miller; siblings Shirley Grattan, Robert Miller, Marjorie (Bruce) Charbonneau, and Donald Ellis; and several nieces and nephews. He was preceded in death by his wife, Barbara; infant son, Scott; parents, Ralph and Marjorie; and sister Jean Sosvielle. A memorial service will be scheduled for a future date at First United Methodist Church, 108 E. 18th Street, Cheyenne. In lieu of flowers, donations in memory of Bruce can be made to the Cheyenne All City Children’s Chorus or a veterans organization of the donor’s choice. Condolences may be left online at www.wrcfuneral.com.

Bruce Miller, 87, of Cheyenne, passed away on January 11, 2021 at Cheyenne Regional Medical Center. Born May 16, 1933 in Worcester, MA to Ralph and Marjorie (Stockbridge) Miller, Bruce will be remembered as a dedicated and loving husband and... View Obituary & Service Information

The family of Bruce E. Miller created this Life Tributes page to make it easy to share your memories.

Send flowers to the Miller family.