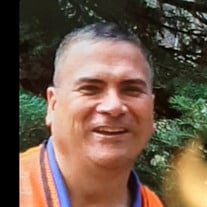 Bobby Joshua Llarinas, 54, of Cheyenne, Wyoming, passed away on July 24, 2021 in Cheyenne He was born December 2, 1966 in Honolulu, Hawaii, and moved to Cheyenne in 1975 with his family and made this his home. Bobby was employed by Fed EX at the time of his passing and was previously employed by Laramie County School District #1 and Blue Cross Blue Shield. Bobby's happiest and greatest times were in the mountains (the great outdoors), hunting, fishing, camping, and spending those days with his nephews, best friends, and his little buddy, Fluffy. Bobby was the most genuine and caring person to all that knew him. No matter what you needed- he would be there for you. He made friends everywhere he went, and he could talk your ear off; leaving all of us wishing to just hear his voice now. His favorite saying was "Indulge Yourself," and he always did. Bobby was and is loved dearly and will forever be missed by so many that had the privilege to have him as part of their lives. He is survived by his sisters, Michaela Mazza(Mark) of Cheyenne, and Roxanne Llarinas of Loveland Colorado; nephews and nieces, Anthony Martinez, Misty Martinez, Jeremy Meinz, Jason Meinz, Christopher Llarinas, Jennifer Harnish, Joshua Llarinas; great-nephews, Auston Martinez, Michael Barela, Braydon Martinez, Landon Meinz, David Harnish, Tyler Harnish; great-nieces, Destini Barela, Ashlyn Martinez, Rylin Meinz; great-grandnephew and niece, Samuel Martinez, Esme Moya; and his best friends, Steve and Mike. Bobby was preceded in death by his parents, Rudy and Walburga Llarinas; brother, Roy; brother-in-law, Anthony S. Martinez; grandparents; and numerous aunts and uncles. Pallbearers will be Anthony Martinez, Auston Martinez, Michael Barela, Steven Meinz, Mike Feurt, Jeremy Meinz, Mark Mazza. Visitation will be Saturday, August 7, from 10-2. Services will be held Monday, August 9, at 2:00pm at Wiedersphahn-Radomsky Chapel of the Chimes, 1900 E. 19th St, Cheyenne, with burial to follow at Olivet Cemetery.

Bobby Joshua Llarinas, 54, of Cheyenne, Wyoming, passed away on July 24, 2021 in Cheyenne He was born December 2, 1966 in Honolulu, Hawaii, and moved to Cheyenne in 1975 with his family and made this his home. Bobby was employed by Fed EX at... View Obituary & Service Information

The family of Bobby Llarinas created this Life Tributes page to make it easy to share your memories.

Send flowers to the Llarinas family.