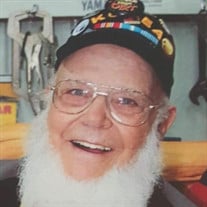 Billy Byron Johnson, 88, joined his wife of 63 years, Beverly A. Johnson, in heaven on Jan. 7th. He was born Nov. 13, 1932 in Pawnee City, NE to Byron E. and Nellie J. Johnson. He graduated from high school in Albin, WY in 1950 and then joined the Navy. He served two tours as an Aircraft Machinist aboard the USS Kearsarge carrier during the Korean War. After the Navy, he performed as an outrider for CFD Chuckwagon races in which he met the LOVE OF HIS LIFE, Beverly (Kopp). He began working as a lineman, mason and cattle-hauler before retiring from the USPS. They settled in Burns in 1973 where they raised their family and later he retired from the school district as a bus driver. He enjoyed camping, motorcycle riding, fishing, hunting, woodworking and their beloved rottweilers. He is survived by his sister, Carol Sorensen of Albin, his children, Bobbi Johnson of Cheyenne, Becky Allen of Meeteetse, Sue (Willy) Wilcox of Lusk, Kevan (Joy) Johnson of Cheyenne, Kelly Cooper of Homer, AK, Paula (Bob) Dennis of Burns and numerous grandkids, great-grandkids, nieces and nephews. And a Special Thanks to his extended Lifecare “Family Members” he obtained while being there. A Celebration Of Life will be held at a later date.

The family of Billy Byron Johnson created this Life Tributes page to make it easy to share your memories.

Send flowers to the Johnson family.