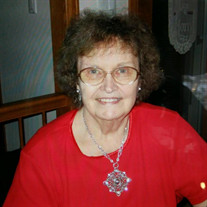 Beverly Jean Lockman, 84, devoted wife, mother, and grandmother, of Cheyenne, died on August 20, 2020, at LifeCare Center in Cheyenne. She was born September 20, 1935, to Vern R. and Jennie D. (Jerpe) Gersmehl in Cheyenne, Wyoming. She graduated from Cheyenne High School in 1953, which was the first class to graduate from Storey Gymnasium. She married Arthur John Lockman on June 6, 1953. They lived in Cheyenne until 1960, where they had three sons, Edward Charles, Richard Lawrence, and Robert John. They moved to Council Bluffs, Iowa, in 1960, and later welcomed a daughter Linda Louise. In 1972, the family moved to North Platte, Nebraska, before returning back to Cheyenne in 1979. A devoted mother, Bev was active in PTA and served as President of the PTA in her children’s grade schools in both Council Bluffs and North Platte. She served as a room mother for numerous years and loved baking and helping with her children’s school parties. She also faithfully attended her children’s and grandchildren’s school programs and sporting events. She could whistle louder than anyone in the stands when her children did well in sports. Bev was an active member of the Union Pacific Junior Old Timers Railroad Club in North Platte and served as President of the Union Pacific Old Timers Auxiliary three times in Cheyenne. She was also President of the Mallet Club. In 1961, she joined Beta Sigma Phi and was an active member of this organization for over 50 years. Bev and Art wintered in Mesa, Arizona, for several years where she enjoyed visiting her cousins, playing bingo, and attending spring training baseball games. She also enjoyed feeding and watching birds, camping, bowling, sewing, embroidery, and counted cross-stitch. She loved all holidays and spending time with her family and grand dogs and grand cats. Bev was very thoughtful and would always send greeting cards to friends and family on their special occasions. Her ability to memorize birthdays and anniversaries was amazing. She also kept a journal for many years to document her daily activities and her family’s special memories. Bev was a member of First United Methodist Church. Bev is survived by her loving husband of 67 years, Art Lockman; children, Robert Lockman (Tara), and Linda Johnson (Dave); and two grandchildren, Nick Lockman and Cortney Lockman, all of Cheyenne. She was preceded in death by her parents; two brothers, Vern R. Gersmehl, Jr. and Donald Gersmehl; and two sons, Edward and Richard. Services will be held at Wiederspahn-Radomsky Chapel of the Chimes in Cheyenne on Thursday, August 27, 2020, at 10:30 a.m. with a reception to follow. In lieu of flowers, contributions can be made to the Cheyenne Animal Shelter. In order to help protect older family members, the family respectfully requests that attendees wear face masks.

The family of Beverly J. Lockman created this Life Tributes page to make it easy to share your memories.

Send flowers to the Lockman family.