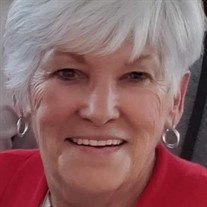 Barbara Ruth Larson joined her loving husband, Donald Larson, in heaven on May 28th, 2021. She was 75 years old. She was born on February 27th, 1946 in Minneapolis, MN. The oldest of five children, Barb was raised in Appleton, MN and graduated from Appleton High School in 1964. The result of a blind date, Barb met Don, the love of her life, at a dance in Madison, MN, in the spring of 1966. That evening, she told her friends that she had met the man she would marry. She did just that on March 30, 1967, in Minneapolis. In 1971, with three children in tow, they moved to Cheyenne, WY and planted solid roots for their young family. In 1977, she began her first career with the phone company. She retired after 23 years to begin her second career as Director of First Impressions at Hickey & Evans, LLP for nearly 20 years. Barbara will be remembered as a sweet, generous soul. Her family called her a "marshmallow" because she wore her heart on her sleeve. She was quick to cry during sappy commercials, each time she watched someone opening a gift she had chosen for them, and whenever she had to say goodbye to a loved one, no matter for how long. She was an avid shopper and accumulated a variety of “foo foo” collections including antiques, spoons, stuffed bears, shoes, and enough greeting cards to open her own shop. Barb enjoyed watching Blue Bloods and Big Bang Theory reruns, football, golf, and playing Wordscapes on her phone. Sunday dinners with her kids and grandkids brought her special joy. She was fiercely loyal and devoted to her family and always available to lend a hand. She nurtured even her oldest friendships, regardless of geographic distance. She was happy to chat for hours on the phone with friends and always made time to meet with them for lunch. She had a great sense of humor and especially loved a good blonde joke. She loved traveling and had the good fortune to visit many historic places and countries over the years with Don, including a wonderful trip to Italy with a large portion of the family in the summer of 2017. She is survived by four siblings: Richard Krebs (Pat) of Appleton, MN, Steve Krebs of Las Vegas, NV, Lee Krebs of Las Vegas, NV, and Jane Henshaw of Apex, NC. She was an amazing mother to three children: Jacki Larson Donner, Steven Larson, and David Larson, all of Cheyenne, WY. She relished being “Gramcracker” to two grandchildren: Kiel Golike (Stephanie) of Chicago, IL, and Reid Golike (Paulitta) of Cheyenne, WY. She was so excited about her recent promotion to “Gigi” to her two great grandchildren: Rebecca Golike and Nathan Golike, both of Chicago, IL. In addition to Don, she was preceded in death by her parents, Rita Krebs Lee and Robert Krebs. Arrangements are under the direction of Wiederspahn-Radomsky Chapel of the Chimes. Her ashes will be combined with Don’s for final disposition. In lieu of gifts to the family, please consider a donation in Barb’s memory to the Friday Food Bag Foundation at http://cheyenneffbag.org. Celebrations of life will be held in Cheyenne, WY and Appleton, MN later this summer.

Barbara Ruth Larson joined her loving husband, Donald Larson, in heaven on May 28th, 2021. She was 75 years old. She was born on February 27th, 1946 in Minneapolis, MN. The oldest of five children, Barb was raised in Appleton, MN and graduated... View Obituary & Service Information

The family of Barbara Ruth Larson created this Life Tributes page to make it easy to share your memories.

Send flowers to the Larson family.