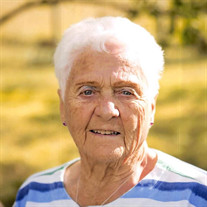 Barbara Jane Hough passed away at the age of 96 on June 7, 2021 surrounded by her family. She was born in Cheyenne on November 4, 1924 and made this her home for her entire life. Barbara graduated from Cheyenne High School in 1942 and married Bud Hough on June 11, 1944. She raised her four children, Danny, Carrie Ann, Jack, and Davey in the family home of 66 years on the old Poor Farm Road. Throughout her life she devoted her time to caring for children, grandchildren, and great grandchildren. In her spare time she enjoyed swimming with the Mermaids, playing bridge with her card club, snowmobiling and Jeeping with her husband and friends in the mountains near the cherished family cabin. She was also a member of the Oak Spokes Car Club and PEO, where she enjoyed volunteering her time. Barbara treasured her time spent with her beloved family in the addition to her house built by her son Jack and son-in-law Roger. The addition was particularly special to her because she could have her entire family together at the same time. She was an avid fan of the Denver Broncos. Upon her move to Sierra Hills Assisted Living Center, she looked forward to her time playing bingo with her daughter Carrie Anne. If they won the jackpot, everyone was sure to know! Barbara is preceded in death by her husband, Bud Hough; son Jack Hough; daughter Carrie Anne Woodhouse and her son-in-law Roger Woodhouse. She is survived by her sons Danny (Kay) Hough and Davey (Robbin Oberheu) Hough, and her daughter-in-law Carol Hough. Her six grandchildren Travis (Sarah Maki); Michael (Laura Weldon) Carlson; Ashley Woodhouse; Bud (Candice) Hough; Bill (Leah) Hough; Mindy (Billy) Inman. And her twelve great grand children Kai, Nikko, Jack, Nick, Evan, Blake, Jonas, Bode, Jackson, Brice, Cooper and Elliott. She is also survived by a large extended family that loved her dearly. A celebration of life will be held Saturday, June 12, 2021 at Uncle Charlie’s, in the upstairs meeting room, from 1-4 p.m. In lieu of flowers, please donate to a charity of your choice.

Barbara Jane Hough passed away at the age of 96 on June 7, 2021 surrounded by her family. She was born in Cheyenne on November 4, 1924 and made this her home for her entire life. Barbara graduated from Cheyenne High School in 1942 and married... View Obituary & Service Information

The family of Barbara Hough created this Life Tributes page to make it easy to share your memories.

Send flowers to the Hough family.