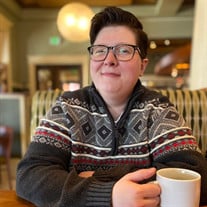 Ashlee Redig, 33, passed peacefully at home on July 22, 2021, in Cheyenne, Wyoming. Ashlee was born in Casper, Wyoming on June 11, 1988 to Donna Ruddy and Bruce Redig. She graduated from East High School in 2007. On July 18th, 2015 she married her love, Cassidy Heatherington. In 2017 Ashlee was proud to receive her associates in graphic design while undergoing chemo treatments. It was a huge accomplishment that was a reflection of her relentless hope for the future. Ashlee was gifted at creating a sense of family among friends. She had a way of making those that she loved feel valued and seen in their own unique light. Her sense of humor and charm had a magnetism that drew most people in. Ashlee was also a proud introvert and self learner; devouring books, stories, and knowledge every chance she got. Ashlee was a passionate connoisseur of music from all genres and it wasn’t uncommon for her to have several live shows on her calendar at any given time. Ashlee loved animals. She built a real loving and gentle connection with each of her pets. They were some of her best friends. Ashlee had a deep love for nature. She loved going on weekend camping trips with her wife, where she could fade into the silence and peace that comes with the mountains and forests. She was known for filling her pockets with rocks from a young age well into adulthood. Ashlee was also an exceptional illustrative artist. Her love for animals, nature, and the occult was very much reflected in her works. She would spend time losing herself in countless powerful pieces that she considered doodles. Anyone lucky enough to witness her work would know that they were so much more than that. They were a small window into the complex soul that was Ashlee. Ashlee was a powerful creature that embodied a perfect balance of both feminine and masculine energies. From within she developed the inner nurturing strength that she needed to walk her path so beautifully and gracefully. She underwent countless treatments and surgeries to stay alive. Every surgery had its risks and she chose again and again to make that sacrifice. She was very proud of her battle scars. She took all of it on the chin and adapted to each challenge, growing and learning from the power in her own strength. Ashlee was, in her own words, “a Viking berserker who is ready to take on anything”. She will be greatly missed. Ashlee is preceded in death by her grandparents Donald and Sandra Ruddy, her Uncle Cade Page, her Uncle Kenneth Ruddy, her Aunt Jorena Ruddy, Rolly the cat, Buddy the dog, and Scout the cat. She is survived by her wife Cassidy Redig, mother Donna Ruddy, brother Jesse Ruddy, father Bruce Redig, aunt Kelly Page, cousins Dalton and Kendall Page, Uncle Duane Ruddy, cousin Mariah Nielsen, Porter the dog, Herkimer the cat and many chosen sisters and brothers. Ashlee wanted to throw one last party! Memorial party arrangements are still in the works and will be announced at a later date.

The family of Ashlee Redig created this Life Tributes page to make it easy to share your memories.

Send flowers to the Redig family.