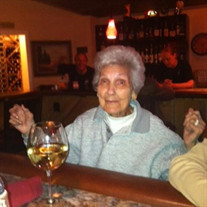 Arva Deloris “Dodie” Goreham, 107, formerly of Cheyenne and Santa Maria, died on July 9, 2021, in Laramie just 9 days short of her 108th birthday. She was born on July 18, 1913, in Macomb, Illinois. She attended school in Illinois until she was 13. Due to the early years of the depression, her family moved to Colorado where her father worked various jobs. The family then migrated to Arizona picking crops along the way. Once in Arizona, the family moved about as they followed the lettuce fields. On a Saturday night she and her brother went into town to attend local dance. That is where she spotted Clark Goreham (Doc) at the sweet age 14. She was taken in by his beautiful blue eyes. It was “love at first sight.” They continued to see each other and eventually Doc convinced her to get married at the tender age of 15 on March, 1929. The young couple continued to following the work of picking crops all the way to California. Doc eventually landed a job as an inspector in Casmalia until the end of the season. As the depression worsened they moved back to Byers, Colorado, where their first son, Ralph, was born on May 19, 1930. Their daughter, Donna, was born on March 25, 1932. Again, jobs were extremely sparse so they moved onto Santa Maria, California, where they camped and lived in tents until well after the depression. Doc and his son, Ralph, eventually bought and owned the G & G Texaco station (Goreham & Goreham, a father and son enterprise.) And as is typical, Dodie was the indentured bookkeeper and cleaning person. Dodie eventually worked in a high-end lingerie shop (Velmar’s.) She loved her clients and enjoyed her job. Dodie had a very gifted talent of painting, which she didn’t begin until she was in her fifties. She created and sold beautiful paintings. (Doc always thought she should emulate Bob Ross for a greater monetary return!) She also loved bowling (bowled a 200 when she was 90), playing Bunko, lunching with her friends, and working out at the YMCA until her late 90’s. She also worked hard at getting her GED late in life in her seventies. She stayed in Santa Maria until her 100th birthday when she then moved to Wyoming to live with her daughter and granddaughter. She loved God and enjoyed being at church and engaging in activities to encourage others. She had an exciting and long life full of adventures, both good and challenging. Dodie was a loving wife, mother, grandmother and friend to all. Her sweet countenance and ready laugh will be missed. She is survived by her son Ralph, daughter Donna Anderson, grandchildren Rick (Penny) Anderson, Curt (Geanie) Anderson, Roxanne (Tom) Ostlund, Wendy (Randy) Claborn, and Linda Goreham. Additionally, she is survived by a multitude of great-grandchildren and great-great grandchildren. She was preceded in death by her beloved husband of 53 years “Doc”, her son-in-law Andy Anderson, her daughter-in-law Patricia Goreham, her sisters Orianna and Ida, her brothers, Ralph, Bobby and John.

The family of Arva Deloris "Dodie" Goreham created this Life Tributes page to make it easy to share your memories.

Send flowers to the Goreham family.