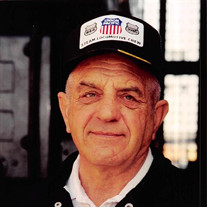 Arthur John Lockman, 91, devoted husband, father, and grandfather, of Cheyenne, died on May 4, 2021, at LifeCare Center in Cheyenne. He was born December 26, 1929, to John and Elizabeth (Weber) Lockman in Cheyenne, Wyoming. He graduated from Cheyenne High School in 1947. Art attended one year at the University of Wyoming and then joined the U.S. Army in 1948 and was discharged in September 1949 and transferred to the Army Reserves, 423 Transportation Truck Company in Cheyenne. Art received his Honorable Discharge in May 1953. Art started his Union Pacific career as a Machinist Apprentice on September 16, 1949. On June 6, 1953, Art married Beverly Jean Gersmehl at the First United Methodist Church in Cheyenne. Art broke in as an Engine House Foreman in July 1953. In 1956, Art was assigned a second shift Machine Gang Foreman and assisted in putting the 4000 and 3900 class locomotives together on the race track. In June of 1957, the Union Pacific closed the steam shop discontinuing the overhaul of steam locomotives. Art then filled Foreman vacations from 1957 to November 1959. Art worked from Ogden, Utah, on the main line to Council Bluffs, Iowa, and all places in between. In January 1960, Art got a job as Engine House Foreman in Council Bluffs, Iowa. Art and the family stayed in Council Bluffs, Iowa, for thirteen years. In September 1972, Art was transferred to North Platte, Nebraska, as Running Repair Track Foreman on the day shift. After seven years, Art had a chance to return to Cheyenne as an Engine House Foreman in August of 1979. On February 1981, Art was put on duty to finish restoring the 3985 steam locomotive. After his job was done he was then assigned as Supervisor of maintaining and traveling with the 844 and 3985 steam locomotives until his retirement in December 1991, after 42 plus years of service. On his last trip to Omaha in October 1991, the Union Pacific and the Steam Crew re-named the tool and supply car the “Art Lockman” which he was extremely proud of. Art served over 50 years in the Masonic organization and was Past Worshipful Master of Rocky Mountain Lodge #40. He was also a member of the Scottish Rite Cheyenne, Korein Shrine Rawlins, and Past Commander of the Legion of Honor Cheyenne, and a member of the Shrine Club. He was also a long-time member of the Airport Golf Club, Past President of the American Historical Society of Germans from Russia, and a member of the American Railway Supervisors Association and Past President of the Union Pacific Old Timers Club. In addition, he worked as a doorman for the Senate at the Wyoming Legislature for eight years. Art and Bev wintered in Mesa, Arizona, for several years where he enjoyed playing golf and attending spring training baseball games. He was an avid fan of the New York Yankees, Los Angeles Lakers, and Chicago Bears. Art was a member of First United Methodist Church. Art is survived by his children, Robert Lockman (Tara), and Linda Johnson (Dave), and two grandchildren, Nick Lockman and Cortney Lockman, all of Cheyenne. He is also survived by two sisters, Norma Duncan and Karen Campbell. He was preceded in death by his parents, his wife Beverly, and sons Edward and Richard. Services will be held at Wiederspahn-Radomsky Chapel of the Chimes in Cheyenne on Tuesday, May 11, 2021, at 10:30 a.m. with a reception to immediately follow at The Gathering Place. In lieu of flowers, contributions can be made to the Shriner’s Hospital.

Arthur John Lockman, 91, devoted husband, father, and grandfather, of Cheyenne, died on May 4, 2021, at LifeCare Center in Cheyenne. He was born December 26, 1929, to John and Elizabeth (Weber) Lockman in Cheyenne, Wyoming. He graduated from... View Obituary & Service Information

The family of Arthur John Lockman created this Life Tributes page to make it easy to share your memories.

Send flowers to the Lockman family.