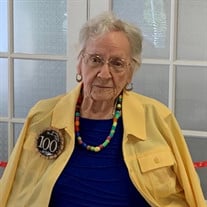 Anita Robinson, 100, of Cheyenne, Wyoming passed away on December 31, 2021 of natural causes. Anita (Wilhelm) Robinson was born in Carpenter, Wyoming, on September 26, 1921, to Charley and Nellie (Clark) Wilhelm. During her younger years she grew up on her family homestead near Carpenter, Wyoming. In 1925, the family moved to Pine Bluffs, Wyoming, she attended and graduated from Pine Bluffs High School in 1939. In 1940, Anita attended beauty school in Greeley, Colorado, where she met Jay Robinson. On March 23, 1941, Anita and Jay were married. They were married for 29 years until his death in 1969. Clara, Anita’s sister, opened the Lorraine Beauty shop in 1942 in Pine Bluffs, Wyoming. The mystery of the name of the shop Lorraine can now be disclosed, Clara’s middle name was Lorraine. Clara sold the shop to Dorothy Hoops and Anita purchased the shop from Dorothy in 1952. She operated the beauty shop until her retirement in 1986. Anita was an active member in Eastern Star. She was an avid golfer and trained three generations of family golfers at the Kimball Golf Course. Anita was an accomplished bowler, having qualified at the state level with a team of her dearest friends. She loved to travel and was never afraid of an adventure. Her travels took her from the northern coast of Africa to the shores of Hawaii. Anita learned to paint later in life and was an incredible watercolor painter. Her paintings are a part of her legacy and treasured by her family. A remarkable life well lived. Anita is survived by her children, Jay (Mary) Robinson, Sunnyvale, California; Troy(Tammy) Robinson, Frisco, Texas, Melody(Jack) Bomhoff, Pine Bluffs, Wyoming; seven grandchildren, six great-grandchildren, and one great-great grandchild, many nieces and nephews, as well as friends. Preceding her in death was her husband, Jay; sister, Yvonne; brother, Robert; sister, Clara, and her parents. Services will be held in the spring of 2022. In lieu of Flowers; Please Make Donations to the PINE BLUFFS SENIOR CENTER.

Anita Robinson, 100, of Cheyenne, Wyoming passed away on December 31, 2021 of natural causes. Anita (Wilhelm) Robinson was born in Carpenter, Wyoming, on September 26, 1921, to Charley and Nellie (Clark) Wilhelm. During her younger years she... View Obituary & Service Information

The family of Anita R Robinson created this Life Tributes page to make it easy to share your memories.

Anita Robinson, 100, of Cheyenne, Wyoming passed away on December...

Send flowers to the Robinson family.